note 1: Small data velocity is a rough evaluation of algorithm's efficiency on small data. For more detailed analysis, please refer to next paragraph.

note 2: some algorithms feature faster than RAM speed. In which case, they can only reach their full speed potential when input is already in CPU cache (L3 or better). Otherwise, they max out on RAM speed limit.

Performance on large data is only one part of the picture. Hashing is also very useful in constructions like hash tables and bloom filters. In these use cases, it's frequent to hash a lot of small data (starting at a few bytes). Algorithm's performance can be very different for such scenarios, since parts of the algorithm, such as initialization or finalization, become fixed cost. The impact of branch mis-prediction also becomes much more present.

XXH3 has been designed for excellent performance on both long and small inputs, which can be observed in the following graph: 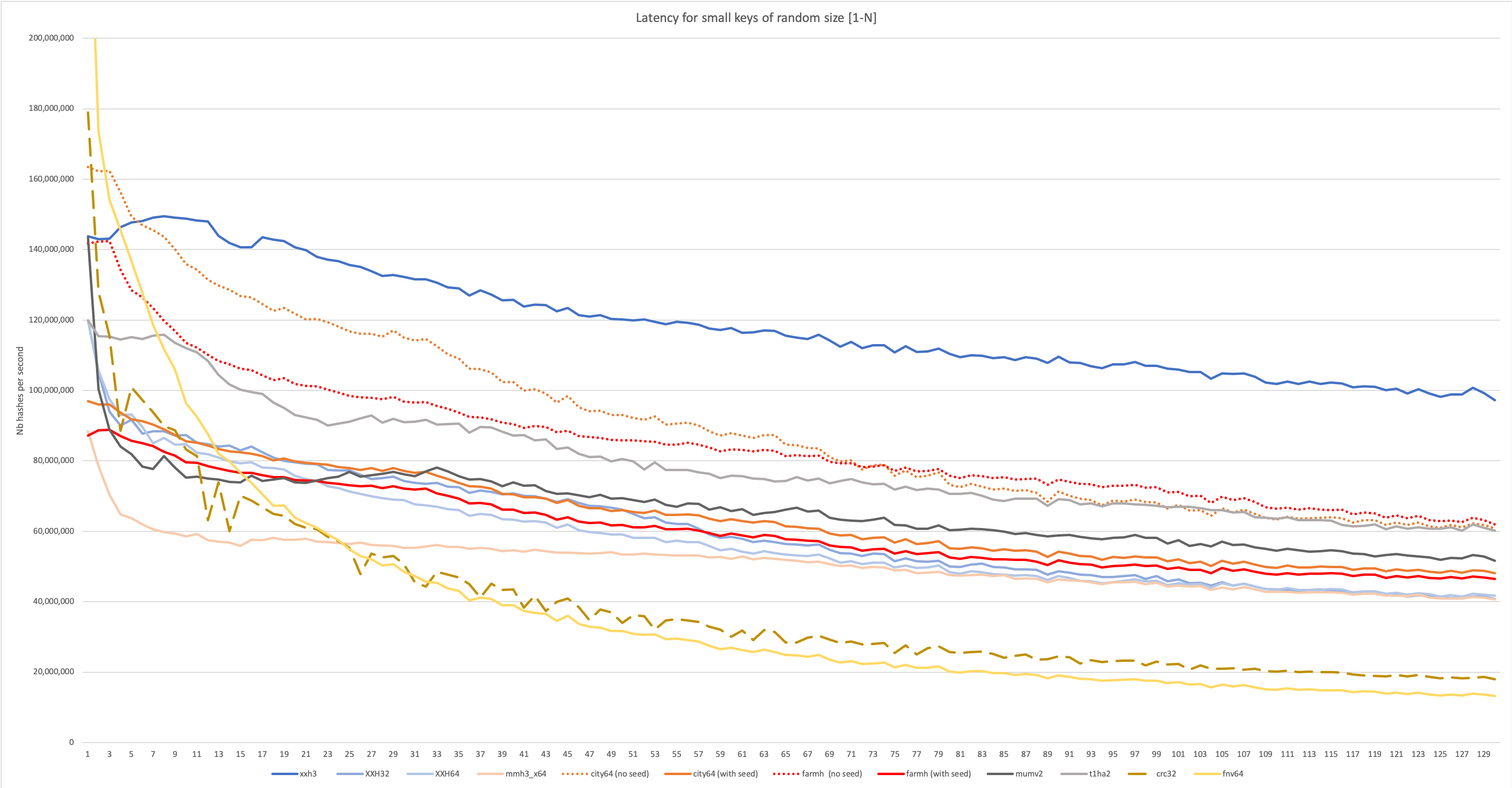 For a more detailed analysis, please visit the wiki : https://github.com/Cyan4973/xxHash/wiki/Performance-comparison#benchmarks-concentrating-on-small-data-

Speed is not the only property that matters. Produced hash values must respect excellent dispersion and randomness properties, so that any sub-section of it can be used to maximally spread out a table or index, as well as reduce the amount of collisions to the minimal theoretical level, following the birthday paradox.

Finally, xxHash provides its own massive collision tester, able to generate and compare billions of hashes to test the limits of 64-bit hash algorithms. On this front too, xxHash features good results, in line with the birthday paradox. A more detailed analysis is documented in the wiki.

The following macros can be set at compilation time to modify libxxhash's behavior. They are generally disabled by default.

You can download and install xxHash using the vcpkg dependency manager:

The xxHash port in vcpkg is kept up to date by Microsoft team members and community contributors. If the version is out of date, please create an issue or pull request on the vcpkg repository.

You can work on xxHash and depend on it in your tipi.build projects by adding the following entry to your .tipi/deps:

An example of such usage can be found in the /cli folder of this project which, if built as root project will depend on the release v0.8.1 of xxHash

To contribute to xxHash itself use tipi.build on this repository (change the target name appropriately to linux or macos or windows):

The simplest example calls xxhash 64-bit variant as a one-shot function generating a hash value from a single buffer, and invoked from a C/C++ program:

Streaming variant is more involved, but makes it possible to provide data incrementally:

Beyond the C reference version, xxHash is also available from many different programming languages, thanks to great contributors. They are listed here.

Many distributions bundle a package manager which allows easy xxhash installation as both a libxxhash library and xxhsum command line interface.